My baby sis bought a cool retro couch on Craigslist and she had so much fun using it to create photo shoots.  Here is a great picture of it and a classic family photo. 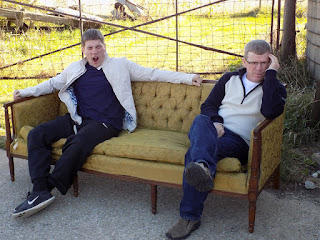 Unfortunately, she made the poor choice to store it on the family farm over the winter where a rat decided that it made for good eating and a great place to live.  The couch was ruined so she threw it on the burn pile.  Well, it did not get burned because I had seen this picture on Dot & Bo and inspiration struck.

I had a plan to up-cycle the couch into an outdoor bench for her birthday.  My dh helped me sneak it off the farm and it sat behind my house for a couple of weeks.

Lucky me that he helped me tear all the fabric off...but that it where the real work began.  Removing every single staple and tack was at least a 20 hour project and dh had helped some with that as well.  All the holes were filled and sanded.  I did learn the importance of using tack cloth to remove debris and getting a smooth surface in this project and and I am now a true believer (p.s. no one has paid me any money to say that!). We added a middle board that runs the entire length to add some stability for seating.  Plywood was cut and added for each side; then the entire frame was painted white.

We used pallet boards that I sanded down, filled holes, sanded, and then stained individually.  All the boards are not the same width so I carefully planned their placement to match in the seating and the back.  The couch has a bow in the front so cutting those boards took extra work.  We numbered the boards to make sure they were in the correct order.  Dh was sweet and counter sank the holes prior to actually screwing the boards in place.  We added a couple coats of spray sealer to finish

I would like to tell you that this was an easy project but it took alot of grit and determination on my part.  It really helped that my dh was a team player and somehow we (without either of us having many woodworking skills) somehow worked through it.

All that is needed now is some pillows or cushions to soften it up. 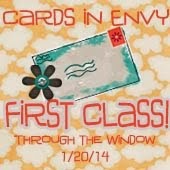 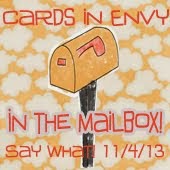 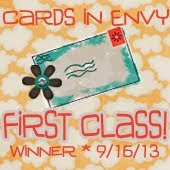 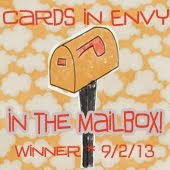 Linda
Hello! I have been crafting for most of my life, it runs in the family. I have tried almost everything at least once with the exception of tatting. I got into quilting because my sister wanted to make a quilt and I knew how to sew. You can figure out the rest on that for yourself. Quilting gave me an appreciation for colors, visual textures and patterns. I got into scrapping because I wanted to create a memory book of the journey I took with my friend Kari; making a t-shirt quilt. I accidently stumbled upon OWH through a magazine article. I decided to start this blog so I could link some of my work for others to see. Anyway, thanks for taking the time to read this.